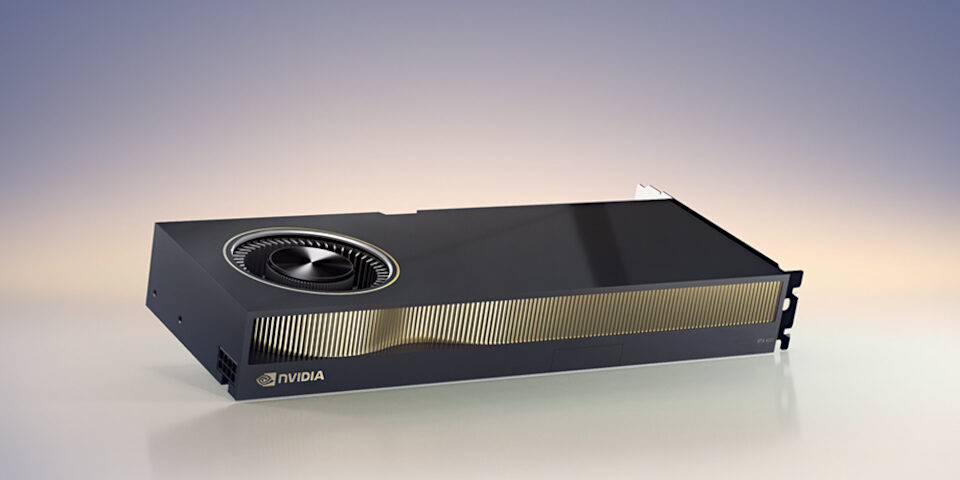 Nvidia has unveiled the RTX A6000, the first workstation GPU based on its new Ada Lovelace architecture.

The 48GB card, which provides “2-4x the performance” of the previous-generation RTX A6000, is due to ship in December, and is targeted at markets including CG content creation, GPU rendering and simulation.

The RTX A6000 was announced during Nvidia’s GTC 2022 conference, alongside the GeForce RTX 4080 and 4090, its gaming counterparts, new server and data centre GPUs, and updates to Omniverse.

In both cases, the change is evolutionary rather than revolutionary, via updates to the RT ray tracing cores and Tensor AI inferencing cores present in current-generation Ampere GPUs.

The third-generation RT cores in Ada Lovelace GPUs provide “2x the throughput” of their current-gen equivalents, and feature enhancements intended to speed up rendering of ray traced motion blur.

The Ada Lovelace cards also feature a new generation of CUDA cores for general-purpose GPU computing, again promising an increase of “up to 2x” in FP32 compute performance.

Specifications and benchmarks
On paper, the RTX 6000 is a significant step up from its predecessor, the RTX A6000, the top-of-the-range Ampere GPU.

We don’t yet have an official figure for FP32 compute performance, but its CUDA core count is almost twice that of the RTX A6000, as are its RT and Tensor core counts.

However, graphics memory is unchanged from the RTX A6000 – 48GB of GDDR6 memory – so there will be no increase in the maximum size of 3D scenes that fit into GPU memory during GPU rendering.

Other key specifications like size, power consumption and display connectivity are also unchanged.

At the time of writing, we don’t have any benchmark figures from Nvidia, so it’s hard to assess how those changes in specs will translate into real-world performance in DCC applications and renderers.

Nvidia’s press release announcing the RTX 6000 puts its performance at “2-4x” that of the RTX A6000, but doesn’t say to which applications this applies.

Pricing and release dates
The RTX 6000 is due to ship in December. Nvidia hasn’t announced a price yet.