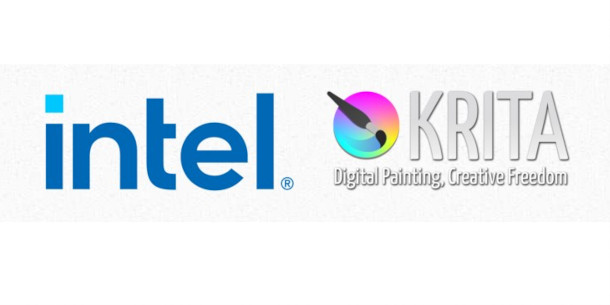 Intel has become the first corporate sponsor of the Krita Development Fund, pledging €30,000/year towards future development of the open-source digital painting software.

The money will be used to develop new painting capabilities in Krita “making full use of” Intel’s processors.

Like its Blender counterpart, the Krita Development Fund enables both individual members of the public and companies to fund development of the software, via a tiered series of monthly and annual donations.

Its initial aim is to fund five full-time Krita developers, with the current total standing at just over half the €15,000/month target, thanks to donations from over 400 individuals, plus Intel’s contribution.

Still a relatively small contribution, but one that may encourage other tech firms
That contribution is much smaller than Intel’s current commitment to Blender: at €30,000/year, its Gold corporate sponsorship is just a quarter of its contribution to the open-source 3D software.

However, it is significant in being the first major tech company to back the Krita Development Fund: something that the Krita Foundation presumably hopes will encourage other tech giants to follow suit, in the same way that Epic Games’ landmark 2019 donation to Blender did for the 3D software.

New funding to be used to improve painting performance in Krita
The Krita Foundation has an established relationship with Intel, with Intel having previously backed work to multi-thread Krita’s pixel brush engine, rolled out in Krita 4.0 in 2018.

The latest donation will also be used to improve painting performance, with the aim of developing new CPU- and GPU-based features “resulting into a more powerful painting experience with less lag”.

The new features will “[make] full use of” Intel’s Core CPUs – both current 12th Gen and future models – and new Arc A Series GPUs.

Not the start of a corporate takeover, no matter what you may read in the Twitter comments
As with corporate donations to the Blender Development Fund, the news has elicited some negative comments on social media, so it’s worth pointing out that as open-source software released under a GPL licence, it would be virtually impossible for a corporate backer, no matter how rich, to ‘take over’ Krita.