Apple has unveiled the M2, the first chip in its second generation of Apple Silicon processors.

The M2, due to ship next month in new MacBook Air and MacBook Pro laptops provides improvements across the board on the original M1 chips, although it doesn’t match the specs of the M1 Pro, Max and Ultra.

In its maximum configuration, the M2 provides two more GPU cores and 50% higher memory bandwidth than the M1, and supports 24GB of memory. So how will that translate into real-world performance in CG software?

In its top-of-the-range configuration, it sports a 10-core GPU, up from a maximum of eight cores for the M1, with a corresponding increase in FP32 compute performance from 2.6 to 3.6 Teraflops.

CPU core count remains unchanged, although Apple says that the M2 has an “18 percent faster CPU” than the M1, based on unspecified “industry‑standard benchmarks”.

Performance per Watt – one of Apple’s key pitches for its processors – has also improved.

At peak power consumption, the M2 chips provide 18% higher CPU performance and 35% higher GPU performance than their predecessors, although peak GPU power use has itself increased by around 25%. 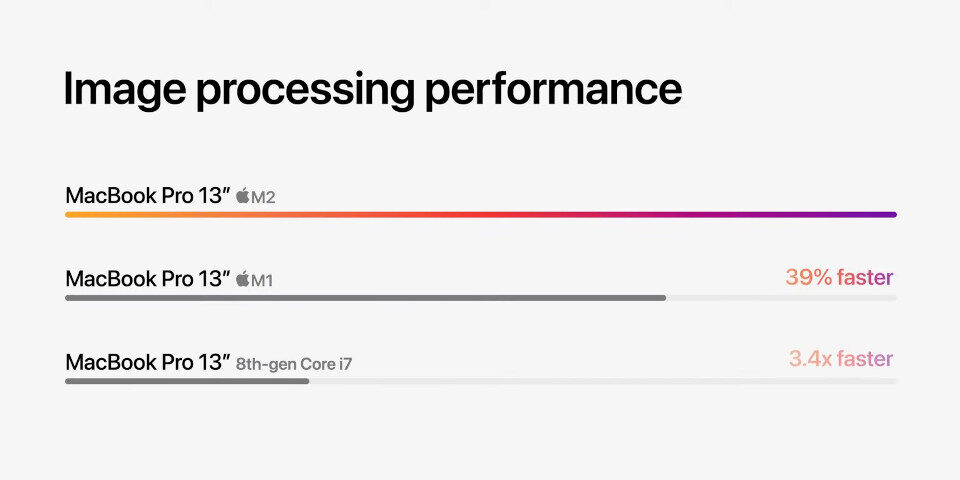 According to Apple’s benchmarks for the 13-inch MacBook Pro, processing RAW images in Serif’s Affinity Photo is 39% faster using a 10-GPU-core M2 processor than a previous-gen 8-GPU-core M1 processor.

Speed boosts for creative software
So how will the specs of the M2 translate into real-world performance in CG software?

As you might expect for a laptop processor, the benchmarks Apple has released are for general image processing and video editing, rather than more intensive tasks like rendering or colour grading.

However, given that the specs of the M2 are considerably lower than Apple’s other previous-gen processors, the M1 Pro, M1 Max and M1 Ultra, for many CG artists, the more meaningful comparision will come when Apple releases their own second-generation counterparts.

So which CG applications natively support Apple Silicon?
It’s also worth noting that for an application to take full advantage of the new hardware, its developer needs to have implemented native Apple Silicon support.

Other applications can run on new Macs via Apple’s Rosetta 2 translation environment, but the performance gains aren’t usually as significant.

Among high-end CG apps, native Apple Silicon support is becoming more common, although at the time of writing, After Effects, Maya, Foundry software like Nuke, and the Substance 3D tools all still use Rosetta.

US reseller Toolfarm has a regularly updated webpage that shows the current status of common post-production tools, and you can find our own list of CG apps that have announced native M1 support here.

Pricing and availability
M2 processors are due to ship in new MacBook Air and 13-inch MacBook Pro laptops in July 2022.

Read more about the M2 processor on Apple’s website