In addition, the engine now has third-party plugins for real-time particle effects solution PopcornFX and for streaming geospatial data in real time from platforms like Cesium.

The engine is the first release of the new Linux-Foundation-backed Open 3D Foundation: a counterpart to VFX technology body the Academy Software Foundation for the game development industry. 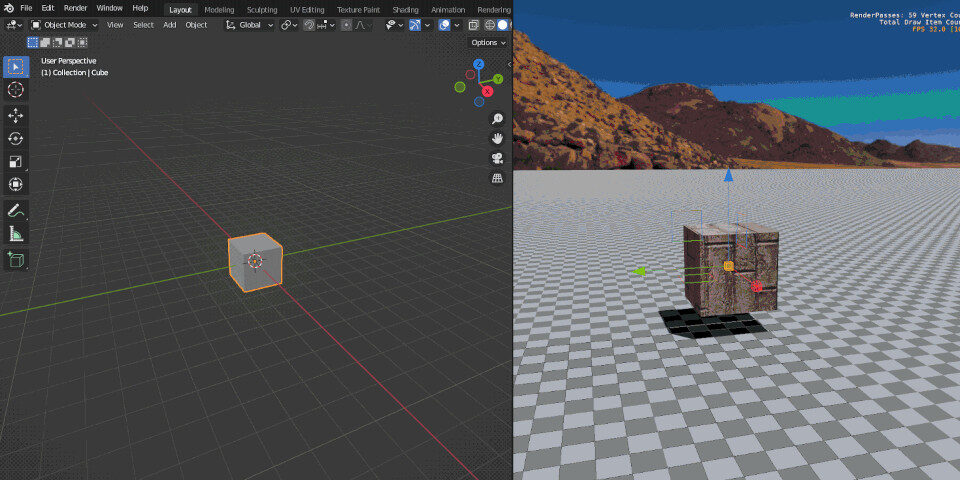 The new User Defined Properties system makes it possible to make edits to the materials assigned to assets in-game inside DCC applications like Blender (left) rather than inside the O3DE Editor.

The system makes it possible for artists to make changes to game assets in DCC software like Blender or Maya – for example, changing the materials applied to a 3D model – rather than inside the O3DE editor.

As well as meshes, UDP can be used to store custom properties for lights or animation nodes.

Metadata can be read in from assets exported in standard 3D file formats, including FBX and glTF.

In addition, the code for materials has been restructured to make materials ‘remixable’.

Material JSON files can now reference another file from which to load base properties, then override any values that need to be customised for sub-materials, reducing duplicated code.

A data-driven technique, motion matching synthesises new animations for a character by extracting properties from a source data set to match the player’s inputs and the character’s surroundings.

It can be used to generate new animations for a character from unstructured motion capture data, avoiding the need to organise motion clips into animation graphs, or to create explicit transitions between them.

Updates to the Atom renderer
O3DE’s Atom renderer has been updated, with Gems now able to inject custom passes to the render pipeline at runtime.

This system is currently used in O3DE’s Terrain, TressFX hair physics and LyShine user interface Gems, with developers able to add support for custom passes to other Gems via a new set of APIs.

The update also adds a Debug Rendering level component for debugging scene lighting, which can override specific properties for all materials in a scene, display normals, or display only diffuse or specular lighting.

A new CubeMapCapture component captures an environment cubemap at any location in the level.

In addition, Atom is now the default renderer in O3DE’s Animation Editor viewport, making rendering performance comparable to that in-game. The legacy OpenGL renderer has been deprecated.

The release also includes updates to O3DE’s Script Canvas visual scripting system, prefabs, audio controls and Multiplayer Gem. You can find a full list of changes via the link at the foot of the story.

The PopcornFX plugin implements the real-time particle effects solution inside O3DE, with source code available under the PopcornFX Community License.

Cesium for O3DE makes it possible to stream geospatial data into the engine in real time, with the source code available under an Apache 2.0 licence.

Availability and system requirements
Compiled binaries of Open 3D Engine 22.05 are available as free downloads for Windows 10 and Ubuntu 20.04+. The source code is available under an Apache 2.0 licence.

Read a full list of new features in O3DE 22.05 in the release notes