Autodesk has released Flame 2023, the latest version of its compositing, finishing and effects software, updating the UI to improve workflow on HDR monitors, and redesigning the Animation Channel Editor.

Flame can now also be deployed in the cloud via Amazon’s AWS platform.

The other products in the Flame family – the two cut-down editions of Flame, Flame Assist and Flare, and colour grading tool Lustre – have also been updated.

Flame family products now officially supported in the cloud
The headline change in the Flame 2023 releases is that the entire family of products, with the exception of Lustre, can now be deployed in the cloud as an alternative to on-premises hardware.

The software has been tested on Amazon’s AWS cloud platform, but the online FAQs suggest that it may also be possible to deploy Flame products on other cloud platforms. 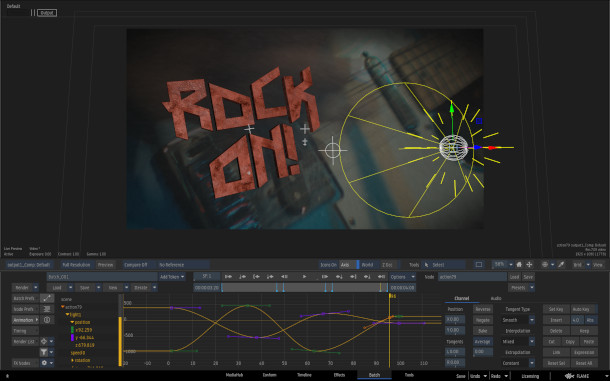 New HDR mode for the UI, and a redesigned Animation Channel Editor
The update doesn’t add new toolsets to the software itself, with the biggest changes being UI updates.

The design style of the UI has been refreshed, with the “venerable Discreet font” getting a more modern replacement; and the UI can now be switched to HDR mode, to make it easier to use on HDR monitors.

In particular, when working with animation curves, all of the canvas framing options are grouped under a single button, and the filtering system has been “completely overhauled”.

All channel operators can now be applied from a contextual menu, making them available from viewports.

Autodesk also now supports Rocky Linux as a replacement for the now-discontinued CentOS.

Other changes include a move from Python 3.7 to 3.9, and updated support for BMD, R£D and Sony RAW.

You can find a full list of updated and discontinued features – archiving to tape is now deprecated – via the links below.