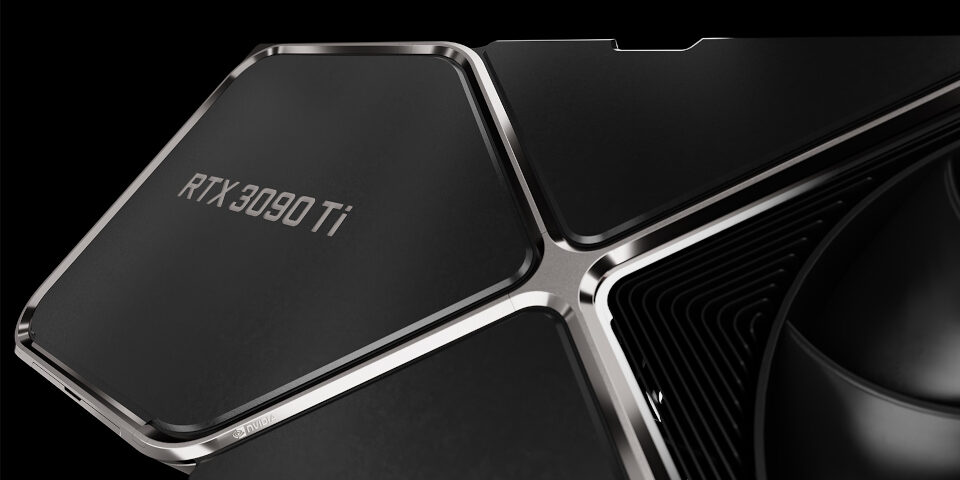 Nvidia has launched the GeForce RTX 3090 Ti, the new top-of-the-range card in its GeForce RTX 30 Series of gaming GPUs based on its new Ampere GPU architecture.

The $1,999 24GB GPU, which is targeted at DCC work and GPU rendering as well as gaming, is described as “the world’s fastest graphics card”.

Specifications and benchmarks
Originally announced at CES 2022, the GeForce RTX 3090 Ti is a turbo-charged version of the existing GeForce RTX 3090 with all of the cores in its GA102 GPU unlocked.

While that doesn’t result in a huge increase in the number of CUDA cores, used for general GPU processing, Nvidia is quoting a FP32 compute performance of 40 Tflops: over 10% higher than the RTX 3090.

Most of that performance increase seems to be due to higher memory clock speed, which rises to 21 Gbit/s, up from 19.5 Gbit/s in the older card.

The figure is high enough for Nvidia to be able to claim in a blog post the GeForce RTX 3090 TI is “the world’s fastest graphics card”, since its FP32 compute performance outstrips even the RTX A6000: at the time of writing, the top-of-the-range Nvidia workstation GPU.

The change in the specs important to GPU rendering is smaller: the RTX 3090 Ti has two more RT ray tracing cores than the RTX 3090, but GPU memory capacity is unchanged, at 24GB GDDR6X.

Nvidia hasn’t released any benchmarks for the RTX 3090 Ti, but you can get some idea of how it is likely to perform with common DCC applications by scaling up from our review of the GeForce RTX 3090.

Expected street prices
Although Nvidia’s US site gives a MSRP of $1,999 for the GeForce RTX 3090 Ti, at the time of writing, it is listed as ‘sold out’ or ‘coming soon’ at all of e-tailers linked from the site.

Nvidia’s UK site gives the MSRP at £1,879, and at the time of writing, it is available to buy online at that price: around $2,470 at current exchange rates.

Pricing and release dates
The GeForce RTX 3090 Ti is available now as both Nvidia’s own Founders Edition card, and from third-party providers including ASUS, EVGA, Gainward, Gigabyte, MSI, PNY and Zotac. Pricing is covered above.

Read more about the GeForce RTX 3050 on Nvidia’s website