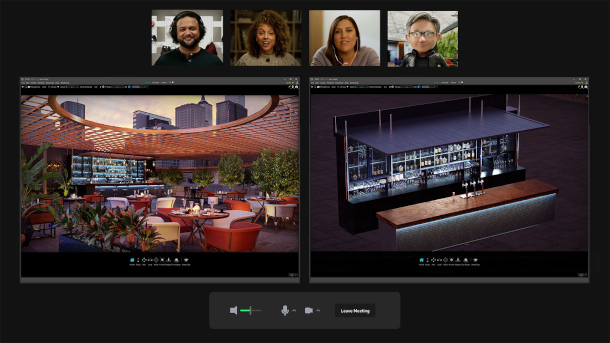 Nvidia has announced Omniverse Cloud, an upcoming suite of cloud services built around Omniverse, its real-time 3D collaboration platform, during the keynote of its GTC 2022 conference.

The move will open up Omniverse, previously only fully available to Windows and Linux users with Nvidia GPUs, to users of other manufacturers’ graphics cards, other operating systems, and to mobile devices.

A USD-based collaboration platform for VFX, game development, design and visualization
Officially launched this January after a year in beta, Omniverse enables artists and designers anywhere in the world to collaborate on projects in real time.

Data is exchanged between compatible CAD and DCC applications and Omniverse in USD format, with connector plugins available for tools including 3ds Max, Maya, Revit, Rhino, SketchUp and Unreal Engine.

As well as the Omniverse core, Nvidia has released frontend applications for specific tasks, including Omniverse Create for scene layout and editing, and Omniverse View for scene review.

That will change when Omniverse Cloud rolls out, with both Omniverse Create and Omniverse View due to become available via GeForce Now, Nvidia’s games streaming platform.

Apps on GeForce Now run in the cloud on RTX GPUs, with the viewport display streamed to a user’s device.

That should make it possible to use the Omniverse apps on pretty much any desktop or mobile device: as well as Windows, GeForce Now runs on macOS, ChromeOS, Android and iOS, and in the Chrome browser.

Nvidia describes it as “like working on a cloud-shared document – but for a 3D scene”.

Other than that, there aren’t many specifics: Nvidia has confirmed that Omniverse Cloud will be a subscription service, and will be available in early access this year, but hasn’t announced dates or pricing yet.

The full suite of Omniverse Cloud services is due in early access in “the next months”. You can find more information on system requirements in the story above. Nvidia hasn’t announced pricing yet.