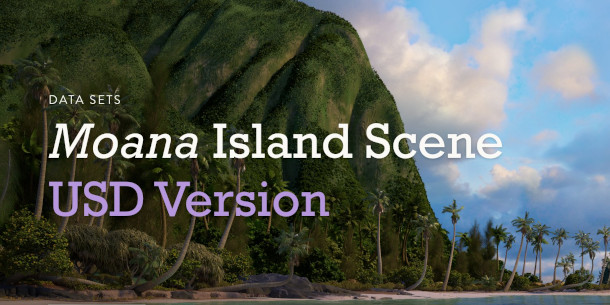 The data – a version of the actual scene used in production, modified to make it possible to render without proprietary tools – is intended for use as a standard dataset for testing rendering algorithms.

The new version, which is structured to generate final-quality renders in RenderMan in a single pass, should make it possible to use the data set to test today’s USD-based rendering pipelines.

A real production scene, comprising 15 billion instantiated primitives
First released publicly in 2018, the Motonui Island data set is an actual production scene, used as part of an early teaser for Moana, and including the surrounding ocean, coral, trees and other vegetation

It is made up of 20 elements, containing meshes with “more than 90 million unique quads and triangles along with 5 million curves”, and more than 28 million instances for leaves, debris and rocks.

When everything is fully instantiated, the scene contains over 15 billion primitives.

Geometry is provided in OBJ format, along with Ptex textures, shading information and animation. The scene contains seven cameras: the primary shot camera used in the original animation test, and six other views.

New USD edition is optimised to generate final-quality renders in RenderMan in one pass
On its release, the Motonui Island data set became an essential resource both for graphics researchers, and for aspiring CG artists who wanted to discover what creating a movie-quality environment actually entails.

But with VFX and feature animation increasingly moving to pipelines based around the Pixar-developed USD format, many users hoped for an updated version of the data set to test contemporary rendering workflows.

The USD version of the environment, generated using a combination of the existing OBJ and JSON files, and the original production data, fulfills that wish.

According to the technical documentation, the focus of the work was to produce USD files capable of rendering final-quality images in one pass, and “does not represent a ‘perfect’ USD file”.

The download includes bindings for rendering the scene in RenderMan, Pixar’s production renderer, but WDAS says that it should serve as “a template for how to experiment with other renderers”.

According to WDAS, future updates to the USD version could take advantage of the USD Purpose attribute to optimise the data set for interactive viewing, or re-introduce animated geometry.

Availability and system requirements
WDAS’s Moana Island Scene is available under a custom licence that permits only research, software development and benchmarking.

As you might expect, it’s a big download: the original base scene is 44.8GB, and the supplementary animation data is a further 23.6GB. The new USD version clocks in at a slightly more streamlined 14.1GB.