Originally posted on 4 March 2020. Scroll down for news of the new photogrammetry capabilities.

Maxon has released Moves by Maxon, a free iOS app for capturing full-body or facial motion capture data for use within Cinema 4D, its 3D animation software.

The tool is an expanded version of Maxon’s previous free app CV-AR, which is restricted to facial capture.

Capture facial or full-body mocap data on an iPhone or iPad for use in Cinema 4D
Moves by Maxon is a markerless capture solution based on Apple’s ARKit augmented reality platform, and requires the IR-augmented TrueDepth camera in recent models of iPhones and iPads.

It processes camera and sensor data to analyse the motion of an actor and translate it to a 3D skeleton.

Users can then import the capture data into Cinema 4D via a separate plugin: by default it generates a QR code that can be used to transfer data directly, but it is also possible to export manually.

We’ve contacted Maxon to ask whether data can be exported in a format that other DCC applications can use, and will update if we hear back.

Updated 6 March: Maxon tells us that it isn’t possible to transfer the data directly to other applications, although it can be exported from Cinema 4D itself.

Current limitations on capture conditions and data quality
Maxon describes full-body capture as a “relatively new feature” of ARKit, and warns that “unexpected results can occur” with the technology in its current state.

In particular, the app may struggle to accurately record fast or overlapping movements, actors wearing loose or patterned clothing, or clothes with a low tonal contrast to the background.

However, Maxon says that the capture quality is suitable for previs work or as a “starting point for animation”. 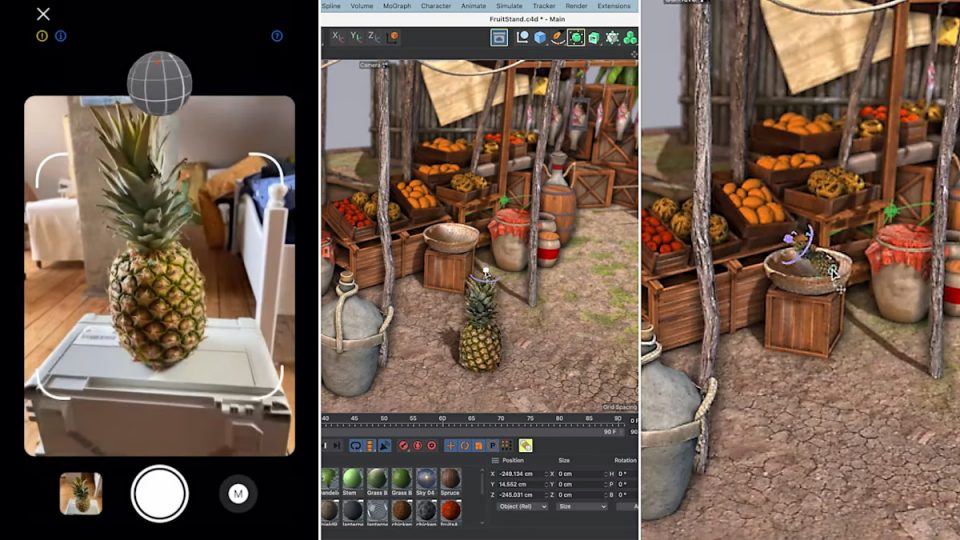 The update adds new photogrammetry capabilities to the app, making it possible to use it to use it to convert sets of photos of real-world objects into textured 3D models.

As its name suggests, the 3D scanning toolset is geared towards reconstructing small objects – the release notes namecheck toys and desktop sculptures – rather than buildings or enviroments.

The app itself is used only for capturing source images, with a globe graphic in the interface showing the user the angles from which photos have been taken, to ensure even coverage.

The images must then be transferred to Cinema 4D itself to generate the 3D model, with the resulting object stored in the software’s Asset Browser, and assigned keywords automatically.

The toolset is based on the new Object Capture API in macOS 12 Monterey, so it only works on Macs, and also requires the new service pack for Cinema 4D R25.

Pricing and system requirements
The Moves by Maxon app is free, and is compatible with iPhones from the XR, XS and 11 series and up, and third-generation iPad Pros and above, running iOS 14.5+.

The new Object Capture system requires iOS 15.0+ and Cinema 4D R25 SP1+ running on macOS 12.0+. It requires either an Apple Silicon Mac, or an Intel Mac with at least 16GB RAM and 4GB VRAM.

GraphN lets you create custom tools for Maya and Unreal