The Godot team has released Godot 3.5, the latest update to the open-source game engine.

The update also adds a new NPC navigation system and an experimental Android port of the Godot Editor.

Since going open-source in 2014, work on Godot has been steadily accelerating, in part thanks to funding from Mozilla, Microsoft, and most recently, grants from Epic Games and Russian game developer Kefir.

In 2019, it became the de facto open-source game engine, with the Blender Foundation removing its own game engine from Blender 2.80 and recommending Godot as a “more powerful alternative”. 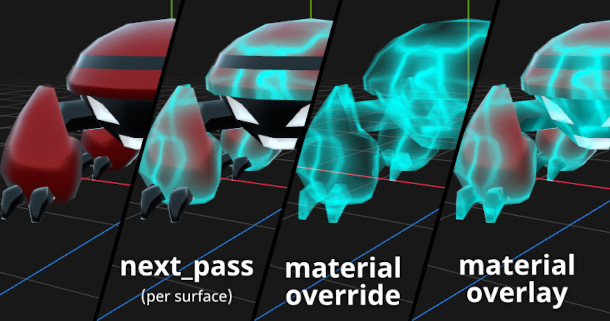 For CG artists: new material overlay system, and in-game 2D and 3D text
The latest of a growing series of interim updates on the way to the long-awaited Godot 4.0 – there’s at least one more to come – Godot 3.5 adds a range of new features, some backported from 4.0 itself.

Key changes for artists include a new material_overlay property, which can be used to generate a range of glow and transparency effects on in-game objects, as shown in the image above.

There are also two new nodes for displaying text in 3D scenes: Label3D for 2D text like in-game information, and TextMesh, for extruding text into 3D meshes.

TextMesh only supports dynamic fonts with vector glyphs – you can’t use bitmap emoji fonts – and the range of control parameters for the meshes generated are currently fairly limited.

In addition, a new 2D gradient texture – not described in the release notes, but shown at 03:20 in the video at the top of the story – makes it possible to create 2D gradients for use as overlays or shader masks.

In addition, a new physics interpolation system smooths out jitter in the motion of objects when rendering at a frame rate different to the tick rate for 3D physics simulations.

You can find details of smaller changes, which include updates to tweening, rendering and the new occlusion culling system introduced in Godot 3.4, via the links at the foot of the story.

It’s still experimental, and doesn’t have a lot of mobile-specific changes, so while it’s possible to use the editor on an Android tablet, it’s really only practical with a connected mouse and keyboard.

Game designers and programmers get a new NPC navigation system with support for obstacle avoidance, and improvements to coding and version control workflow.

Availability and system requirements
Godot 3.5 is available under the MIT licence for 32-bit and 64-bit Windows, and 64-bit Linux and macOS. There are also browser-based and Android ports of the Godot Editor.

Read an overview of the new features in Godot 3.5 on the Godot team’s blog

Read a full list of new features in Godot 3.5 in the online changelog