A recording of JangaFX’s livestream previewing the revamped GPU particle system in EmberGen 1.0, the next major update to the real-time gaseous fluid simulation tool. The Q&A section starts at 01:01:00.

JangaFX has previewed EmberGen 1.0, the next version of its real-time gaseous fluid simulator, showing off the major new feature in the release: a revamp of the software’s GPU particle system.

Key changes include a particle trail system, emission of flames and smoke from particles, force masking, improved particle lighting, and the option to export particles to other DCC applications in Alembic format.

EmberGen will also feature a complete rework of the software’s export system, and Deep EXR support.

No date has been set for the final release, but preview builds are already available to registered users.

An earlier preview of R&D work on EmberGen’s GPU particle system, showing emission of smoke and fire from “millions of GPU particles” in real time. The functionality is one of the the changes due in EmberGen 1.0.

Finer control of particle emission and grouping, and over how particles are affected by forces
First introduced in EmberGen 0.5.5, the GPU particle system provides artists with a way to add fine detail to the software’s voxel-based simulations.

The overhauled version in EmberGen 1.0 will provide much greater control over how GPU particles are emitted, how they are affected by forces, and how they are lit and rendered.

New features include new injection controls in particle emitters, shown at 00:23:40 in the video, making it possible to emit flames or smoke from particles.

The update also introduces a new Particles Manager node that can be wired to a particle emitter to control particle grouping, making it possible to set up motion trails, as shown around 00:13:00 in the video.

Other new features include “force masking“: the option to apply forces to individual channels – Velocity, Temperature or Smoke – of a particle system, to create more subtle effects. 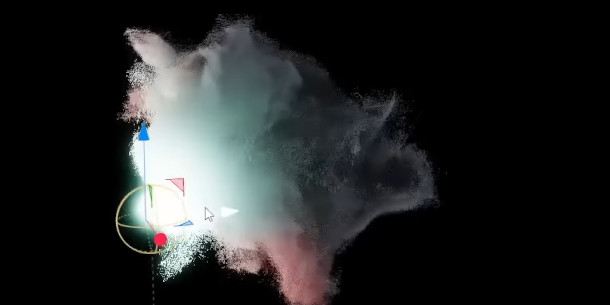 Better particle lighting and rendering
In addition, the update supports “proper lit particles”: at 00:04:20 in the video, you can see a point light being moved through a particle system, with the illumination changing in real time.

Particles can also themselves be emissive, making it possible to use them to light smoke.

And while EmberGen previously had a hybrid render mode for rendering smoke and particles together, the update introduces “proper sorting” of particles, with those occluded by the smoke no longer being rendered.

The functionality – originally scheduled for 2020 – will make it possible to render EmberGen particles in other DCC applications or game engines, rather than with EmberGen’s built-in renderer.

The change is part of a wider overhaul of EmberGen’s export system, intended to simplify the process of exporting assets: you can see a mock-up of the new export UI at 01:25:20.

As well as grouping all of the export settings together into a single interface, EmberGen 1.0 will make it possible for users to save settings as export presets and reuse them across other projects.

Other features listed in JangaFX’s public roadmap for EmberGen 1.0, but not shown in the livestream, include Deep EXR support and the option to import multiple meshes.

Pricing and system requirements
Preview builds of EmberGen 1.0 are available to registered EmberGen users via JangaFX’s Discord server. JangaFX hasn’t announced a release date for the stable version yet.

According to JangaFX, the minimum system requirements will be the same as the current stable release, EmberGen 0.7.5.5: Windows 10+ and a Nvidia GTX 1060 GPU or better, or AMD equivalent.

Indie subscriptions, for artists with revenue under $1 million/year, cost $19.99/month, with users qualifying for a perpetual licence after 12 months of consecutive payments. A new indie perpetual licence costs $199.99.

See an overview of the new features planned for EmberGen 1.0 on the software’s Trello roadmap