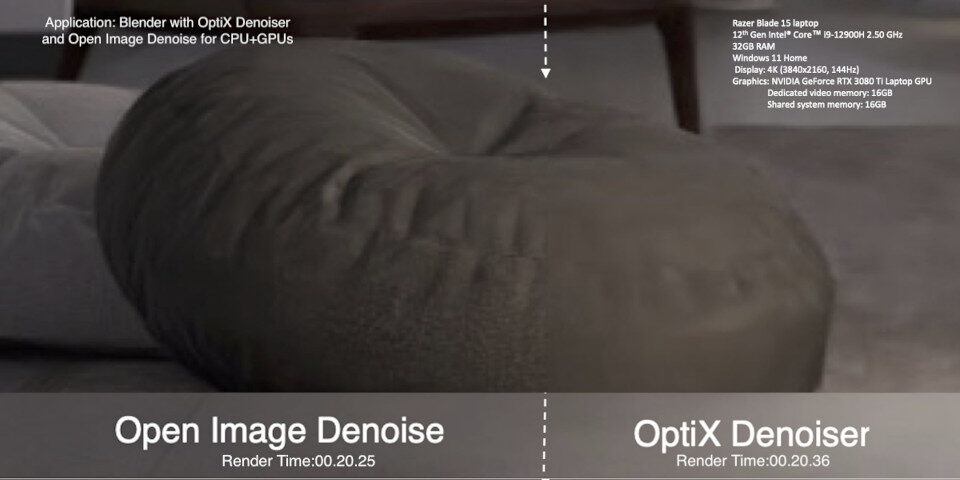 According to Jeffers, the implementation also supports GPUs from AMD and Intel itself.

The technology is now integrated into a range of DCC tools and renderers, including Arnold, Blender’s Cycles render engine, Cinema 4D, Houdini, Modo, V-Ray and Unity, where it is used to denoise lightmaps.

Unlike OptiX, OIDN isn’t hardware-specific: while it was designed for Intel 64 CPUs, it supports “compatible architectures”, including AMD CPUs and, as of last year’s 1.4 update, Apple’s new M1 processors.

Now runs on both CPU and GPU
To that list of compatible architectures, we can now include GPUs.

The functionality isn’t available in the current public release, Open Image Denoise 1.4.3, but Intel’s demo image, included at the top of this story, shows it implemented inside Blender’s Cycles renderer.

The image shows the output of OIDN running on a Nvidia GeForce RTX 3080 Ti laptop GPU and an Intel Core i9-12900H CPU, side by side with that of OptiX running on the GPU alone.

If implemented in public builds of software, the change should enable developers to take advantage of the full processing power of users’ machines, and to support CPU and GPU denoising with a single code base.

Availability and system requirements
Open Image Denoise is available for 64-bit Windows, Linux and macOS under an Apache 2.0 licence. Both source code and compiled builds are available.