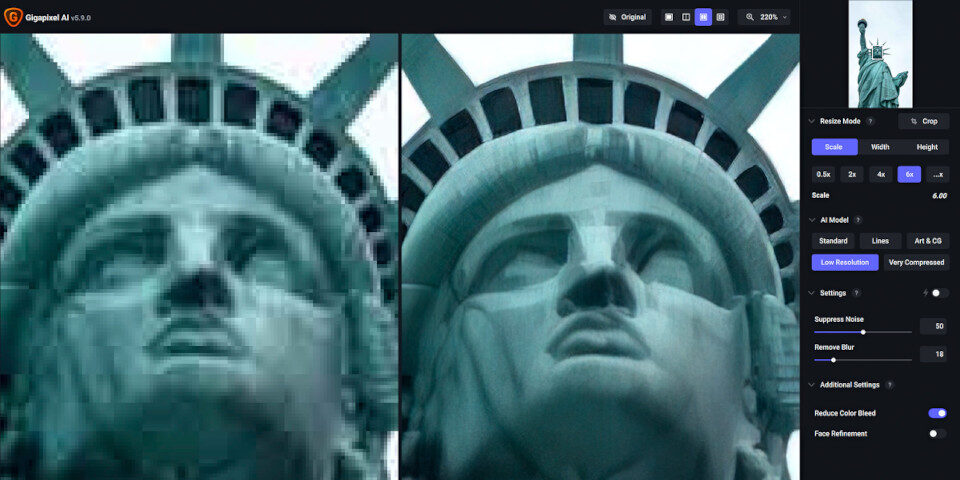 Topaz Labs has released Gigapixel AI 6.0, the latest version of its AI-trained software for increasing the resolution of photos or rendered images without softening or introducing noise into the result.

The update adds native support for Apple’s M1 processors, reducing processing times on M1 Macs by around 40%; and added an optimised 16-bit version of its Standard AI model to improve performance on Windows.

Full disclosure: the update was actually released last month, but we didn’t manage to cover it at the time.

Its algorithms are trained using a data set of “millions of photos of all subjects and styles”, and can enlarge photos by “up to 600%” before image quality starts to drop visibly.

The software supports batch processing, making it possible to run it on entire image libraries.

Works for renders as well as photos
Although it’s marketed primarily at photographers, Gigapixel AI can also be used on rendered imagery – and, as of Gigapixel 5.3, has a dedicated AI mode for CG images and scanned artwork.

As well as simply upscaling low-res renders to generate high-res images more quickly, it can be used to remove residual noise from renders by upscaling them in Gigapixel, then reducing them to their original size.

While there are a number of open-source libraries and free online services for upresing images, its supporters claim that Gigapixel achieves better-quality results.

The update also introduces optimised 16-bit backends for the software’s Standard AI model, which should improve performance on Intel Macs, and on Windows machines processing images on the GPU.

Workflow and UX improvements include increased tonal and colour contrast in the UI; and users now have the option to download all of its AI models on installation, to remove the need for manual downloas later.

Pricing and system requirements
Gigapixel AI 6.0 is available as a standalone application for Windows 10+ and macOS 10.14+; and as a plugin for Photoshop and Lightroom Classic, on both Windows and macOS. New licences cost $99.99.

The software is OpenGL-based, so it should work on any manufacturer’s hardware, but requires a reasonably powerful GPU.

Read a full list of new features in Gigapixel AI 6.0 in the online release notes