The update, which is being previewed at GDC 2022 this week, and which is due to become available in “Q2 2022”, introduces support for temporal as well as spatial upscaling to improve the visual quality of output.

FSR render upscaling improves the frame rate of games – and now CAD and DCC apps
Launched last year, FSR is an image upscaling system, enabling software to render the screen at lower resolution, then upscale the result to the actual resolution of the user’s monitor.

The workflow improves frame rates over rendering natively at the higher resolution without loss of visual quality – or at least, without significant loss of quality if the increase in resolution isn’t too extreme.

AMD intially pitched the technology at game developers – it’s available natively in Unity, and there is a free plugin for Unreal Engine – with over 60 titles now supporting it, including God of War and Far Cry 6.

However, AMD also recently integrated FSR into Radeon Pro Software for Enterprise, its suite of drivers and tools for its workstation GPUs, where it can be used to raise viewport frame rates in CAD and DCC apps.

FSR is already supported in Lumion 12, the current version of Act-3D’s real-time architectural visualisation software, with “other professional application software providers … planned for [the] future”. 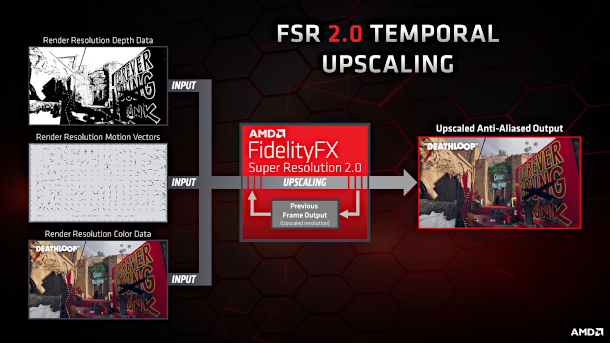 According to AMD, the change not only improves the quality of the upscaled images over FSR 1.0 at all output resolutions, but delivers “similar or better than native image quality”.

You can judge that claim for yourself in the video at the top of the story, which shows side-by-side footage of Deathloop, Arkane Studios’ first-person shooter, running natively at 4K, and under FSR 2.0.

Unlike DLSS 2.0, Nvidia’s rival temporal upscaling system, which makes use of the Tensor cores in Nvidia GPUs, FSR 2.0 does not require dedicated machine learning hardware.

AMD’s blog post notes that FSR 2.0 will work with “select competitor graphics cards”, but there are no further details so far.

Licensing and release dates
FSR 2.0 is due to become available in “Q2 2022”. AMD hasn’t announced full system requirements yet.

FSR 1.0 requires 64-bit Windows 10 and a GPU with Direct3D 12 or Vulkan support. The source code is available under a MIT licence.