Its developer, former Scanline VFX editor Jonas Kluger, describes it as “a simple and easy way to organise the ‘chaos folder’ that probably every company has somewhere on the server”.

Users can browse the contents of the library by thumbnail previews and filter them via keyword tags.

Other notable features include the option to define file naming conventions and library folder structures by dragging and dropping name elements around in a visual interface.

The software also makes it possible to set up templates for transcoding files automatically: a feature used internally to generate thumbnails and previews for an asset library.

A second model generates tag suggestions based on the assets you have previously added to the library.

According to the online FAQs, the results need double-checking by a human user, but “the number of categories … will constantly increase and the model will get better over time”.

The software also has a command-line edition, which can be run on a renderfarm, automatically tagging shots as they are rendered. 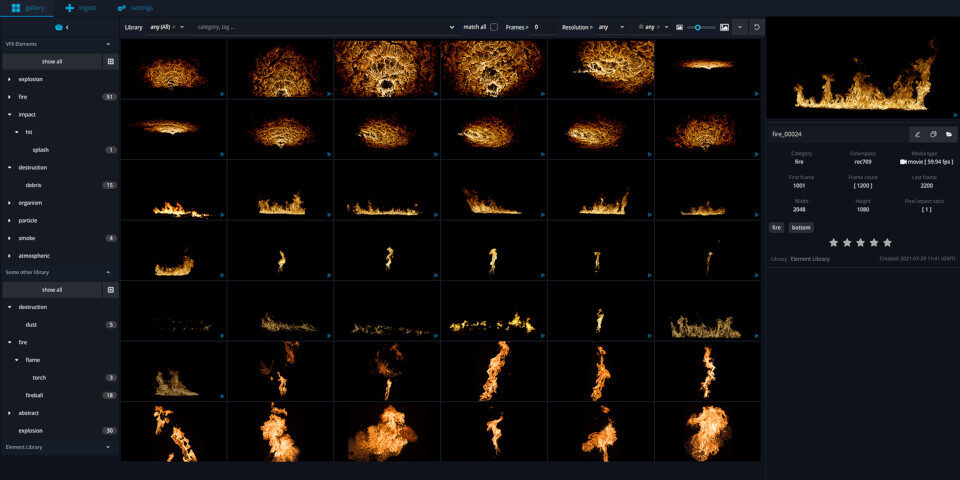 The update adds support for a wider range of file types, with users now able to use the software to organise After Effects projects, Nuke templates, Illustrator and InDesign files, and PDFs: for example, camera reports.

Other changes include a new system for generating more meaningful thumbnails for file sequences and videos that automatically grabs a representative frame for the asset; and a new ratings system for assets.

Pricing and system requirements
Das Element 1.1.4 is available for 64-bit Windows 10 and CentOS/Debian Linux. The software is rental-only.

Jonas Kluger tells us that support for 3D file formats is planned for future releases.

Read more about Das Element on the product website