The new ThinkStation P620 will ship later this month, with the Threadripper Pro 5000 WX Series CPUs also due to become available to other system assemblers at the same time.

Total CPU core counts remain constant for equivalent models in the 5000 WX and 3000 WX Series, ranging up to 64 cores for highly threaded tasks like CPU rendering or simulation in the Threadripper Pro 5995WX.

In addition, there is a new mid-range CPU: the 24-core Threadripper Pro 5965WX. 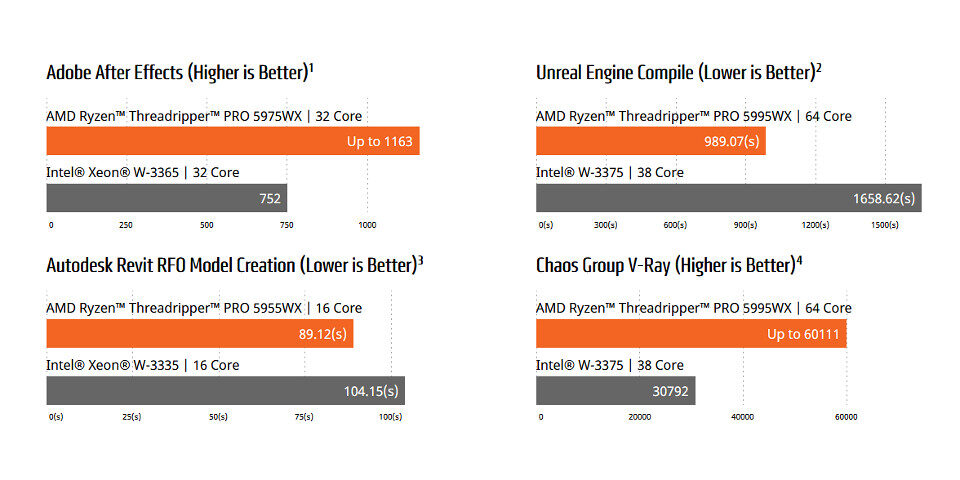 Among DCC apps, AMD claims that the Threadripper Pro 5975WX outperforms the Xeon W-3365 by up to 32% in compiling Unreal Engine, up to 38% in V-Ray rendering, and up to 40% in Maya viewport performance.

Clearly, these aren’t independent tests, but they do suggest that the new Threadripper Pro CPUs will remain a popular option for studios looking to build high-end graphics workstations cost-effectively.

The other key specs remain unchanged from the original models: up to 1TB of 3,200MHz DDR4 RAM, and up to 20TB of storage, spread across up to six drives.

If AMD follows the same release pattern as with previous Threadripper Pro CPUs, the Threadripper Pro 5995WX, 5975WX, 5965WX, 5955WX and 5945WX CPUs will initially be available via OEMs before becoming available to buy individually.

AMD hasn’t yet announced prices for the CPUs publicly.