A recording of QuadSpinner’s livestream previewing the new features in Gaea 1.3. The update, described as the biggest in the terrain-generation software’s history, is now available as a new long-term support release.

QuadSpinner has released Gaea 1.3, a major update to its next-gen terrain design tool.

New features in the release, described as “our biggest and most powerful update yet”, include a new Rivers node to automatically generate river networks and a beginner-friendly version of the flagship Erosion node.

The update – a compatibility-breaking long-term support release – also introduces the long-awaited option to generate seamlessly tiling terrain, and a Tiled Builds system for generating terrains larger than than 8K.

As well as by creating and editing a conventional scene graph, users can control terrain forms through a Photoshop-style layer system or by direct sculpting.

The software includes a procedural erosion system capable of mimicking snow, scree and sediment deposition, which can even be used to ‘sculpt’ fine details into a terrain.

Once generated, terrains can be exported as meshes, point clouds or height maps, with the option to generate LODs or variants via a built-in terrain mutation system.

The software is used for both game development and visual effects work, with testimonials on QuadSpinner’s website including artists at studios including Respawn Entertaiment and Scanline VFX.

Gaea 1.3: a major backwards-compatibility-breaking update
The first major update to the software for almost two years, Gaea is described as “our biggest and most powerful update yet” in QuadSpinner’s blog post.

It isn’t backwards-compatible with previous versions of the software – both Gaea 1.2 and alpha builds of 1.3 itself – but is intended as a long-term support (LTS) release, and will continue to receive critical fixes. 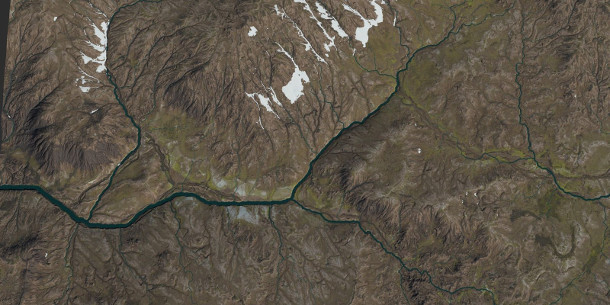 New nodes for generating river networks, canyons, hills and water surfaces
New features include the Rivers node, which generates river networks, even in landscapes in which they would not normally form, adapting terrain while “preserving [its] overall shape and character”.

The release also adds the Wizard node, a “lightweight wrapper” for the existing Erosion node intended to simplify the process of setting up hydraulic erosion effects for terrain.

There are also 16 other new nodes, including dedicated generators for landscape features like canyons and hills, and a Sea node for generating water surfaces.

New nodes for modifying terrain include Sunlight, which can be used to control snow melt or plant growth.

Updates to the existing terrain-blending and erosion nodes
Updates to existing nodes include new Insert and Embed modes in the Combine node.

Unlike other terrain blending modes, the shapes from the source terrains are not “contaminated” by one another, making it possible to add smaller features like rocks into a terrain while preserving its overall form.

In addition, Gaea’s erosion nodes get a new Sediment Removal feature, which removes surface sediment to expose underlying crevices; and several nodes get a height picker tool for sampling height values on terrain.

The process is recursive, with new Seamless and Repeat nodes making it possible to tile an already tileable landscape feature across a larger area of terrain.

Indie, Pro and Enterprise editions: new Tiled Builds system and Turntable Animator
In addition, users of the commercial editions of the software get an experimental new Tiled Builds system, which makes it possible to generate terrains larger than the existing 8,192 x 8,192px limit, by splitting them into buckets that are blended together at the end of the build process.

It’s currently still an experimental feature, and is not recommended for use in production until the stable release, scheduled for Gaea 1.3.1 later this month.

Other new features exclusive to the commercial editions include Turntable Animator, which renders 360-degree turntables of terrains, for use in asset reviews or portfolios.

Performance and workflow improvements
Under the hood, the software’s new Sophia algorithm adapts the triangle density of meshes generated to the complexity of the underlying portion of terrain, typically reducing poly counts by “20-40%”.

Unlike generating a fixed-density mesh – still available as an option – the process only generates triangle-based rather than quad-based meshes, and does not automatically generate levels of detail.

Overall performance is “up to 30% faster” than Gaea 1.2, with the most noticeable improvements when previewing terrain at higher resolutions.

Workflow improvements include a new Start screen, providing access to over 110 new quickstart files illustrating how to create different types of terain; and a Help menu for accessing documentation.

Pricing and system requirements
Gaea 1.3 is available for Windows 7+ only. The free Community Edition, which is licensed for commercial use, provides access to most of the key tools, but caps export resolution at 1K.

The Indie edition, which caps export resolution at 4K, costs $99; the Professional and Enterprise editions, which provide 8K resolution plus a range of advanced features, cost $199 and $299 respectively.

Read an overview of the new features in Gaea 1.3 on QuadSpinner’s blog