Color Intelligence has unveiled Colourlab Ai 2.0, a major update to its AI-based colour grading software. The release, currently available in public beta, was announced at a livestream earlier this week.

Color Intelligence has also cut the price of the Pro edition of the software, introduced a new lower-priced Creator edition, and introduced new integrations for Final Cut Pro and Premiere Pro.

Co-developed by colorist Dado Valentic, founder of training provider Colour Training and post house Mytherapy, the technology has quickly been adopted in the broadcast, VFX and games markets.

The software is capable of automatically matching the grade of an entire sequence of shots to a reference shot or image to a quality described in early reviews as equivalent to the first pass by a human colorist.

Speaking during the latest livestream, Valentic described Colourlab Ai as a “glimpse into the possibilities of how AI is going to [enable us to] work smarter”.

“Some jobs don’t need colorists,” he commented. “[Sometimes] you just want to do looks effortlessly.” 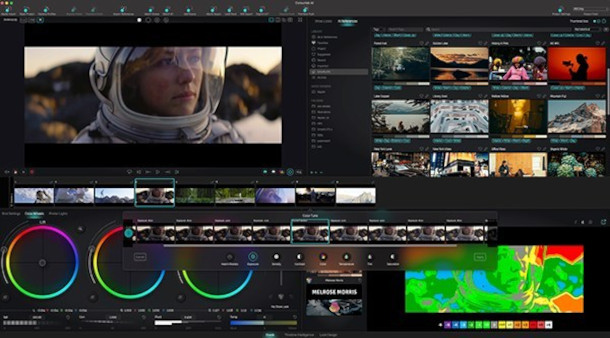 The system is intended mainly for jobs like reality shows with tight turnaround times or high volumes of footage, where the main aim is to get a good enough result very quickly.

At the opposite end of the spectrum, for jobs where absolute quality takes priority over speed, Colourlab Ai 2.0 also introduces Color Tune, described as the software’s AI engine running in “semi-manual mode”.

The system enables a human colorist to adjust the parameters used by the AI itself, like exposure and density, via a visual workflow in which users select from sets of automatically generated variant images.

Both combine conventional 3D LUTs with parametric values that can be edited inside Look Designer.

In addition, Smart LUTs include ‘content fingerprints’ from reference frames for use with the software’s AI engine, making the resulting look a combination of the LUT, parametric controls, and the reference image.

Users can sort shots on the timeline according to their visual similarity to the shot selected: for example, to find all of the shots filmed in a particular location.

It is also possible to sort shots into common categories – including close-ups and wide shots, interiors and exteriors and day and night shots – without the need for prior manual tagging.

New history system, workflow improvements, and better performance on new Apple processors
Other changes include a Versions system, making it possible to restore and edit previous versions of a look; and updates to the software’s Auto Exposure and camera matching systems.

Workflow improvements include the option to multi-select clips, and to pop out scopes as floating windows.

The software is also now “heavily optimised” for Apple’s new M1 Pro and M1 Max processors, making it “up to 10x faster”.

The price of the Pro edition, which includes Look Designer and Grainlab, the existing direct link to DaVinci Resolve, and new integrations for Final Cut Pro and Premiere Pro, falls from $490/year to $299/year.

The Creator edition, which costs $129/year, lacks Look Designer and Grainlab, NDI output and support for Blackmagic Design and Tangent control surfaces, and only integrates with Final Cut Pro and Premiere Pro.

Pricing and system requirements
Colourlab Ai 2.0 is available in commercial beta for macOS only. Color Intelligence hasn’t announced a final release date yet. A Windows edition is due “later this year”.

Read an overview of the new features in Colourlab Ai 2.0 on Color Intelligence’s website

Read a full list of new features in Colourlab Ai in the online changelog
(Not updated to version 2.0 at time of writing)