Originally posted on 27 May 2021. Scroll down for news of the Preview 1 update.

Epic Games has released Unreal Engine 5 in early access. The news was announced yesterday during one of the company’s livestreams, the recording of which is embedded above.

The much-anticipated next-generation edition of the game engine and real-time rendering system, UE5 streamlines the interface of the Unreal Editor, and introduces a range of disruptive new technologies.

All are used in Valley of the Ancient, Epic’s new real-time graphics demo, the project files for which are available to download alongside Unreal Engine 5 itself.

The stable production release, originally due this year, has now been pushed back to 2022. 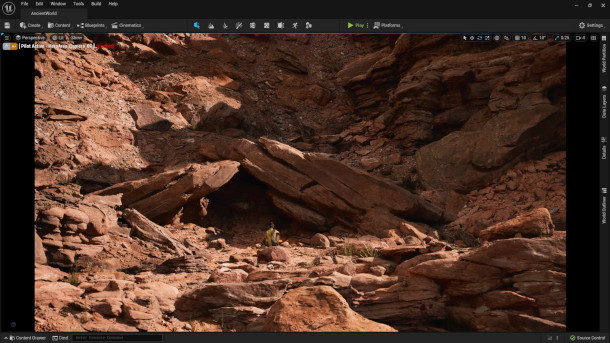 The Content Browser can now be accessed like a drawer, automatically minimising again after use, and editor tabs can be collapsed into tabs on vertical sidebars bounding the viewport.

The new UI design also provides more scope to customise the look and layout of the interface, including the option to create your own custom colour themes.

Nanite geometry is streamed into the engine on demand and scaled losslessly, removing – or at least reducing – the need for manual preparation tasks like baking normal maps or authoring LODs.

According to Epic, that makes it possible to use “film-quality source art” – anything from high-res ZBrush sculpts to raw scan data – directly inside Unreal Engine.

Again, it should reduce the need for manual preparation – in this case, baking light maps.

We covered both Lumen and Nanite last year, so check out our original story for details.

However, one related feature not covered in the initial announcement is UE5’s new system of Virtual Shadow Maps (VSMs), intended to generate plausible soft shadows at resolutions matching Nanite geometry.

To preserve interactive performance, VSMs split base high-resolution shadow maps – in the current implementation, 16k x 16k resolution – into 128 x 128px tiles that are rendered only as needed.

Tiles are also cached between frames unless the lights or objects casting them move.

Animation: new full-body IK solver, motion warping, and better in-editor rigging
On top of that, the latest livestream revealed a range of new features for character rigging and animation.

Animators get an experimental new full body IK solver, described by Epic as “deterministic, reliable, and around 10x faster than before”, and a new motion warping system.

It enables users to modify root animations using transform data passed in via Blueprints, making it possible to reuse the same animation in multiple contexts.

In the livestream, it was shown in use to modify a character’s vault animation according to the height of the objects she was vaulting over, automatically adjusting vault height and foot placement.

The toolset is intended to reduce the need to switch from the Unreal Editor to external DCC tools for character work: during the livestream, Epic showed a hero character rigged and animated entirely in-editor using Control Rig and Unreal Engine’s Sequencer animation editor.

A replacement for the legacy PhysX physics, it was initially pitched primarily at real-time destruction, but has since evolved into a more general multiphysics system.

Although they weren’t shown during the livestream, the Unreal Engine 5 documentation lists several new capabilities for Chaos, including fluid and hair simulation.

Neither is described in detail, but there is more information on Physics Fields, a new system for interacting directly with Chaos physics simulations at runtime in a specified region of space.

Suggested use cases include enabling pre-fractured geometry to break apart when a player enters a particular area, or to exert forces on rigid bodies.

In addition, physics sims can now be run in their own separate thread, rather than the main game thread.

Enabling Async Physics increases the predictability of a simulation, as shown in the before-and-after video above, but at the cost of introducing lag between gameplay behaviour and physics. 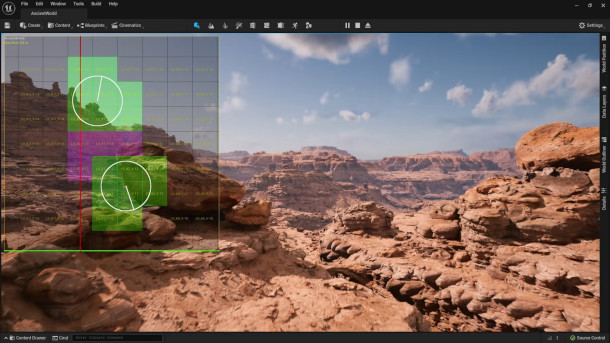 Rather than designers having to create individual levels, a single large world is automatically broken down into a grid of streamable cells that can be selectively loaded or unloaded in the editor.

At runtime, only cells within a user-defined radius of the player are streamed in, with those outside being automatically replaced with lower Hierarchical Levels of Detail (HLODs).

Changes made to the world are also now tracked at the actor level, not the world level – an approach that Epic describes as ‘One File Per Actor‘ (OPFA) – facilitating collaborative workflows.

According to Epic, it should be possible for multiple artists to simultaneously light, set dress and rework terrain in a project without overriding one another’s changes.

As well as controlling objects’ visibility in the viewport like the existing Layers system, the new implementation makes it possible to decouple environment assets from gameplay elements entirely, enabling artists to modify the environment without interacting with gameplay triggers. 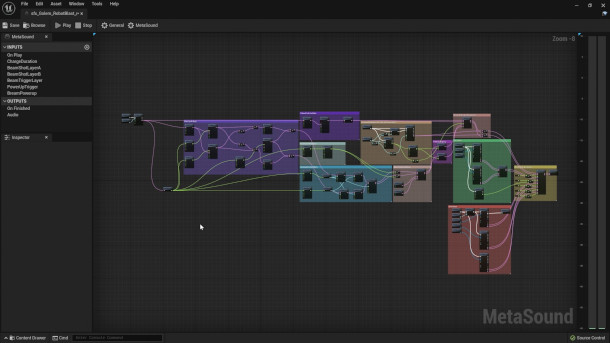 Epic describes it as analogous to modern materials and rendering pipelines, “bringing all the benefits of procedural content creation to audio that the Material Editor brings to shaders”.

The new system, which makes it possible to split out game features into separate plugins, should help to keep a project’s codebase clean, and to reduce accidental dependencies between unrelated features.

Unreal Engine 5 also introduces Turnkey, a new system to automate “most of the steps” in setting up support for new deployment platforms, including finding source files for installing SDKs and flashing dev kits.

The release is the first version of UE5 to be targeted officially at users working in markets outside game development, including previs, virtual production, visual effects and architectural visualization.

According to Epic’s blog post, the change involves moving to double-precision values for co-ordinates, plus “performance and memory optimization to help ensure that these changes have very little overhead”.

Crowd agents can interact with props and environment objects via a new Smart Objects system which packages the information needed for the interactions in the objects themselves.

Agents can also avoid other agents and entities via Mass Avoidance, a new force-based avoidance system based on MassEntity, Mass AI’s framework “for data-oriented calculations”.

Other key changes include a new IK Rig and IK Retargeter, for pose editing skeletal meshes, and automatically transferring animations between characters with different bodily proportions.

In addition, animators get new Distance Matching and Pose Warping systems intended to match the play rate of an animation and pose of a character to better match the motion of that character in-game.

Lighting and rendering: updates to Lumen and the Path Tracer render engine
In the lighting and rendering toolsets, Lumen gets full hardware ray tracing support, support for landscapes, and final gather and glossy reflections on translucent materials.

Users can now apply transform operations like rotation and scale to viewports directly in the Output Mapping panel of the nDisplay Config Editor; and can choose to overlay stats on a per-viewport basis.

Other changes include overscan support for the inner frustum, and the option to visualise its border.

In addition, open-source real-time computer vision library OpenCV is now available in Unreal Engine via a standalone plugin, rather than users having to integrate it manually.

There is also a new Console Variables Editor plugin, intended to provide a central location to view and modify all of the console variables and commands set in a project.

Use of the editor is free, as is rendering non-interactive content. For games developed with the engine, Epic takes 5% of the gross royalties after the first $1 million generated by a title.

It makes use of several of the new toolsets covered in this story, including Nanite, Lumen, the new animation features, improved Chaos fracture workflows, and modular gameplay and level organisation.