Originally posted on 6 April 2020. Scroll down for news of the first release candidate.

The latest video shows an interesting combination of manual and semi-automated retopology features, including a neat option to split a sculpt into separate meshes for retopology by painting masks.

One of the original dedicated retopology tools
Originally released over a decade ago, TopoGun was one of the first dedicated tools for retopologising high-res meshes, enabling artists to turn detailed sculpts into lower-res, more animation-friendly assets.

The software featured a range of tool types, with users able to draw out polygons manually across the surface of a sculpt, then using a brush-based workflow to modify the new topology.

A separate Morpher extension transferred modifications made to the high-res sculpt to low-res topology that had already been created, automating the process of retopologising blend shapes.

Breaking years of silence
Although still widely used, the software has been virtually dormant in recent years: the last major version, TopoGun 2, was released in 2012, and the last post on the product forum was in 2018.

During that time, many 3D apps – including ZBrush, Maya and Blender – have gained native retopology toolsets, while a number of new retopology plugins and standalone tools like Wrap have been released.

The news that TopoGun would return to take on these rivals came last summer, with a post on social media announcing that “it’s been a while, but finally we have news”.

Beta testing of TopoGun 3 – “rewritten from scratch”, according to the announcement – was originally due to begin last fall, but was eventually announced this February for TopoGun 2 licence holders.

TopoGun 3: blending manual and semi-automated workflows
So far, Pixelmachine has released two videos of TopoGun 3, the most interesting of which is the one above, which shows a complete timelapse of the process of retopologising a human head.

One interesting addition that bridges the divide between the two is the new Patch tool.

It enables users to sketch out major regions of a sculpt following anatomical landmarks, as shown in the image above, and have TopoGun generate new topology within them automatically.

Patches can then be joined to create a continuous new low-poly surface for the entire sculpt.

In the comments on the Vimeo video, Pixelmachine says that it can be used to retopologise internal structures, like the cavity of the mouth.

Other features shown include the option to draw guide lines onto a sculpt to plan ahead before creating new topology, and to adjust the polygon density of the new geometry created on the fly.

According to the video, the software now offers “more maps to bake” – there are UI rollouts for normals, displacement, color, cavity, curvature, AO and transmission – and a “simple licensing system”. 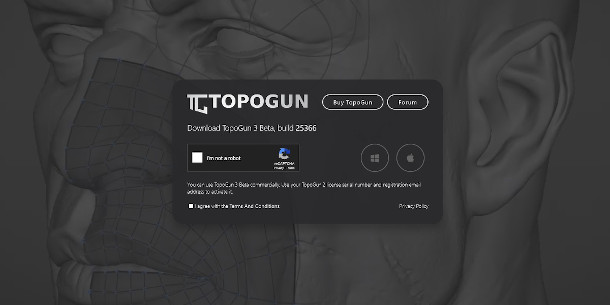 Updated 21 May 2020: Pixelmachine has released TopoGun 3 as a public beta.

Visitors to the new product website can download the beta and run it in demo mode; anyone with a licence of TopoGun 2 can use their existing serial number to activate it.

TopoGun 3 RC1 is out! Among other features, we now have fbx support. Make sure you uninstall any previous version first and update to the latest license server, in case you’re using floating licenses. https://t.co/pC3gZGVgTF

Pricing and system requirements
TopoGun 3 is available in beta for Windows and macOS. The beta can be used for commercial work. New node-locked licences cost $100; floating licences cost $250.