The Blender Foundation has posted an overview of work done with Facebook Reality Labs on Blender’s Cycles renderer during parent company Meta’s first year as a Corporate Patron of the open-source 3D app.

The work, intended to improve real-time rendering of digital characters, includes a new Alembic procedural that speeds up loading of animation caches by “up to an order of magnitude”.

What struck many users – even Blender Foundation chairman Ton Roosendaal described the news as “surprising” – was that the firm seemed to have little need to foster Blender development.

Meta’s motivation has now become clearer with the announcement that Reality Labs, the firm’s AR/VR research unit, has been looking at Cycles as a renderer for some of its projects.

According to the Blender Foundation, Meta is “interested in improving Cycles’ real-time rendering capabilities and features for high-quality digital human rendering”. 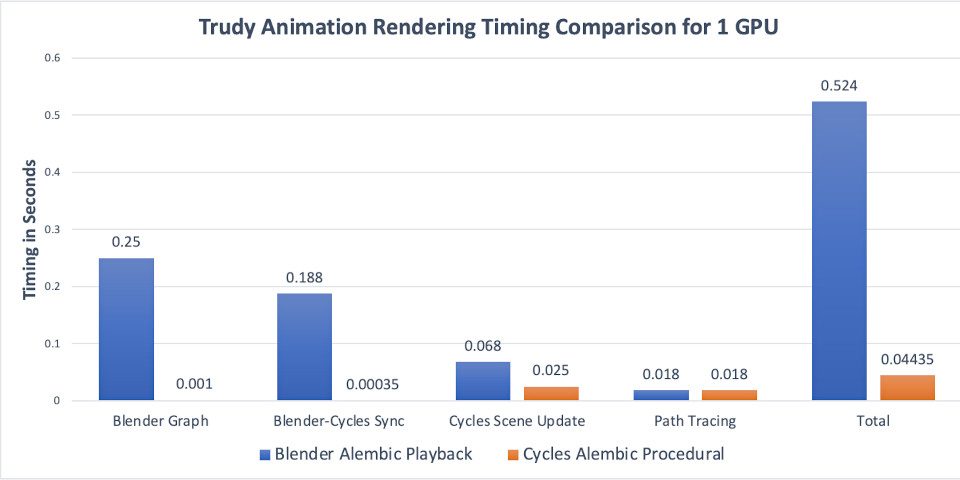 New Alembic procedural speeds up viewport rendering of animation caches inside Cycles
In a blog post, Blender developer Kévin Dietrich summarises the results of the first year of collaboration with Reality Labs on Cycles, including the development of a new Alembic procedural.

Streaming data into Cycles directly from the Alembic file at render time, rather than importing and converting the file into Blender first, improves load times by “up to an order of magnitude”.

The new procedural was implemented earlier this year as an experimental feature for viewport rendering, but is not yet available for final renders. You can find details of its current limitations here.

According to the blog post, the work has improved rendering of subsurface scattering effects via the addition of an anisotropic phase function to better simulate the way that light interacts with human skin.

Future work may include a native USD procedural
The developers now aim to improve the rendering of eyes inside Cycles, with an upcoming patch for manifold next event estimation intended to accelerate the convergence of caustic effects.

Dietrich also says that the team “may explore” the development of a native USD procedural in future, to speed up the rendering of data in Pixar’s Universal Scene Description format inside Cycles.

Support for the import of USD data has just been added to the software in Blender 3.0, released last week.