Originally posted on 2 December 2020. Scroll down for news of the Vantage 1.6 update.

The software, previously known as Project Lavina, makes use of the RT cores in current-generation Nvidia RTX graphics cards to generate an interactive real-time, fully ray traced view of the environment.

It is available free until June 2022, after which subscriptions will cost $389/year.

A new tool for scouting very large architectural scenes in real time
First shown as a tech preview at Siggraph 2018, and released in public beta this summer, Chaos Vantage is pitched as a tool for exploring large 3D scenes in a fully ray traced environment.

Although there are potential uses for visual effects and animation – for example, scouting virtual sets – the main target market is architectural visualisation. 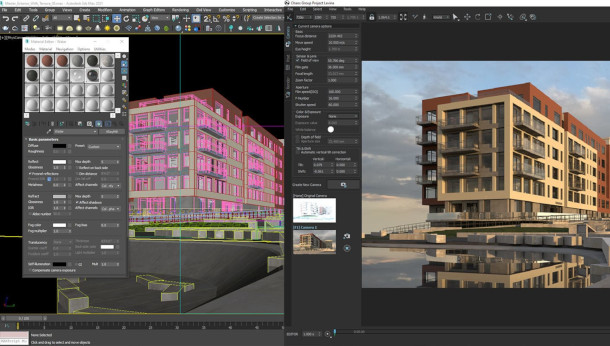 Renders scenes imported in .vrscene format and live-links to 3ds Max
Chaos Group’s pitch for using Vantage over other real-time rendering solutions – particularly Unreal Engine, which is free for this kind of work – is ease of use.

Rather than having to convert scenes created for offline renders into a form suitable for use in a game engine – still a time-consuming process, despite tools like Datasmith – Vantage can render the original versions.

It imports scenes in .vrscene format, the scene file format supported in the standalone edition of V-Ray and most of its key editions, including V-Ray for 3ds Max, Cinema 4D, Maya, Modo, Revit, Rhino and SketchUp.

Vantage also live-links to 3ds Max, with changes made to a scene inside Max updating in Vantage in real time, enabling the software to function as a ray traced viewport.

Doesn’t yet support all advanced features of V-Ray scenes
However, that doesn’t mean that imported scenes will necessarily look identical in the two applications, since Vantage doesn’t currently support all of the features of the .vrscene format.

Coverage varies according to host application: in 3ds Max, most light types, V-Ray Sun, the physical camera, and most basic materials and maps are supported.

Features not currently supported include mesh lights and V-Ray Ambient Light; advanced settings for shadows and the physical camera; and some key materials like VRayDirt and VRayDistanceTex.

Designed specifically for Nvidia’s RTX hardware
Unlike V-Ray GPU, V-Ray’s own built-in GPU renderer, Chaos Vantage has been designed from the outset for real-time ray tracing – and for Nvidia graphics cards.

Clearly, that will depend on the scene being viewed, but Chaos Group claims that Vantage can “handle billions of polygons without any loss in detail or significant decrease in speed”.

Built-in animation editor creates simple camera animations
As well as simply exploring scenes, Vantage can be used for rendering in its own right.

The software includes its own animation editor, making it possible to create simple camera animations by setting camera positions and transitions between them.

Chaos Group describes the output as being suitable “for presentations or previsualization purposes”, rather than as an alternative to final-quality rendering in V-Ray.

New since the beta releases: motion blur and two layers of environment fog
If you’ve been following our coverage of the original beta releases of Project Lavina, there are also a few new features in Chaos Vantage.

One of the biggest is support for motion blur and denoising in offline renders: both for still images and animations, which can now be rendered in .mp4 and .mkv format.

Users can also now record the viewport in real time in .mp4 format.

Vantage also supports environment fog – it is now possible to use two fog layers with independent settings – and LUTs, with support for colour space settings for LUT files. 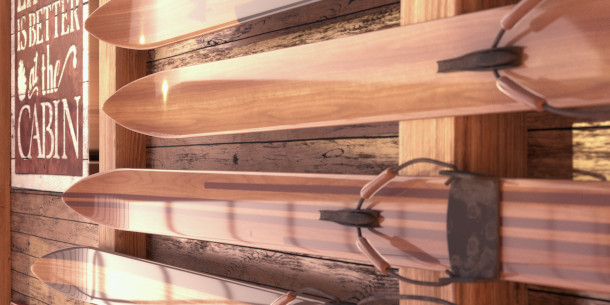 Other changes include support for importing multiple cameras from a .vrscene file, and for exporting .png files with an alpha channel. 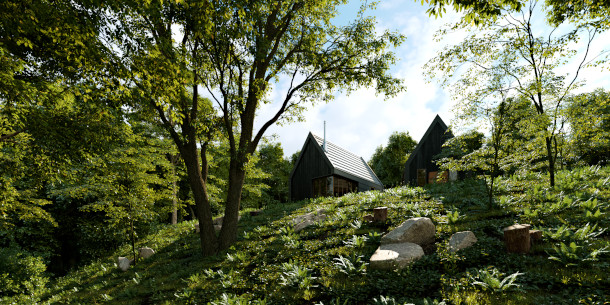 Updated 24 May 2021: Chaos has released Vantage 1.3, adding support for VRay2SidedMtl, V-Ray’s two-sided material, and for animated camera parameters from an imported .vrscene file.

The update also adds support for batch rendering, introducing a render queue for both still images and animations; and for importing and exporting FBX, OBJ, 3DS, PLY, STL, TER, Collada and glTF files.

Since we last wrote about the software, Vantage 1.5 introduced a new Place mode for the Move tool for snapping objects onto surfaces, and command-line support.

Chaos has also further extended the end of the period during which free one-year licences are available – initially June 2021, then December 2021 – until 15 June 2022.

Pricing and system requirements
Chaos Vantage is available for Windows 10 only. To use it, you need a Nvidia RTX GPU and Nvidia driver 436.02 or newer.

The software is rental-only: one-year licences are free until 15 June 2022, after which subscriptions will cost $389/year. Vantage has also been added to Chaos Group’s V-Ray Collection product bundle.

GraphN lets you create custom tools for Maya and Unreal